Why Black Church Should Matter to Black Millennials? 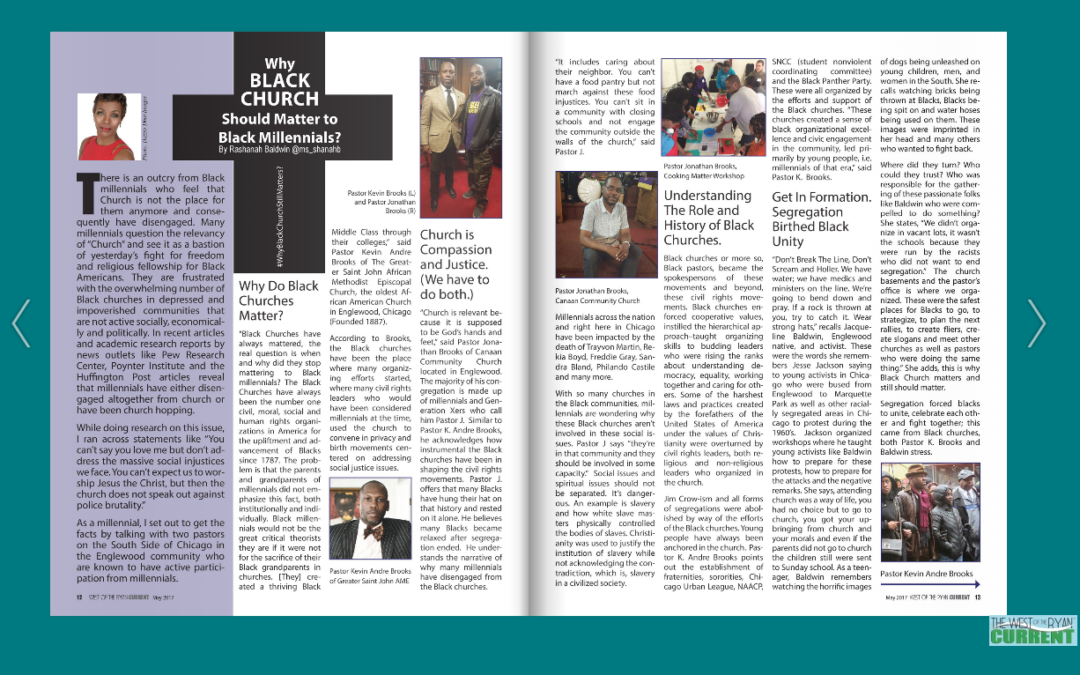 Why should Black millennials re-engage in the Black Churches?

There is an outcry from Black millennials who feel that church is not the place for them anymore and consequently have disengaged. Many millennials question the relevancy of “church” and see it as a bastion of yesterday’s fight for freedom and religious fellowship for Black Americans. They are frustrated with the overwhelming number of Black churches in the depressed and impoverished communities that are not active socially, economically, and politically. In recent articles and academic research reports by news outlets like Pew Research Center, Poynter Institute, and the Huffington Post articles reveal that millennials have either disengaged all together from church or have been church hopping.

While researching this issue, I ran across statements like “You can’t say you love me but don’t address the massive social injustices we face. You can’t expect us to worship Jesus Christ, but then the church does not speak out against police brutality.”

As a millennial, I set out to get the facts by talking with two pastors on the South Side of Chicago in the Englewood community who are known to have active participation from millennials.

Why Do Black Churches Matter?

“Black Churches have always mattered, the real question is when and why did they stop mattering to Black millennials? The Black Church always been the number one civil, moral, social and human rights organization in America for the upliftment and advancement of Blacks since 1787…the problem is that the parents and grandparents of millennial did not emphasize this fact…both institutionally and individually…Black Millenials would not be the great critical theorist they are if it was not for the sacrifice of their Black grandparents in Churches who created a thriving Black Middles Class through their colleges, etc. ,” said Pastor Kevin Andre Brooks of The Greater Saint John African Methodist Episcopal Church, the oldest African American Church in Englewood, Chicago (Founded 1887).

According to Brooks, the Black churches have been the place where many organizing efforts started, where many civil rights leaders who would have been considered millennials at the time and the church could convene in privacy and where movements centered on addressing social justice issues were birthed.

Church is compassion and Justice. (We have to do both)

The church is relevant because it is supposed to be God’s hand and feet,” said Pastor Jonathan Brooks of Canaan Community Church (1701 W. 55th) located in Englewood. The majority of his congregation is made up of millennials and generation X’ers who call him Pastor J.  Similar to Pastor K. Andre Brooks, he acknowledges how instrumental the Black churches have been in shaping the civil rights movements. Pastor J offers that many Blacks have hung their hat on that history and rested on that alone. He believes many Blacks became relaxed after segregation ended. He understands the narrative of why many millennials have disengaged from the black churches.

“It includes caring about their neighbor. You can’t have a food pantry but not march against these food injustices. You can’t sit in a community with closing schools and not engage the community outside the walls of the church,” states Pastor J.

Millennials across the nation and right here in Chicago have been impacted by the death of Trayvon Martin, Rekia Boyd, Freddie Gray, Sandra Bland, Philando Castle, and many more.

With many churches in Black communities, millennials are wondering why churches aren’t involved in these social issues. Pastor J says, “they’re in that community, and they should be involved in some capacity.” Social issues and spiritual issues should not be separated. It’s dangerous. An example is slavery and how white slave masters physically controlled the bodies of slaves. Religion is used to preach to them and teach them about being spiritual, while not acknowledging that they were oppressing them through slavery.

Understanding The Role and History of Black Churches.

Black churches or more so Black pastors became the spokespersons of these movements and beyond these civil rights movements. Black churches enforced cooperative values, instilled the hierarchical approach—taught organizing skills to budding leaders rising in the ranks about understanding democracy, equality, working together, and caring for others. Some of the harshest laws and practices created by the forefathers of the United States of America under the values of Christianity were overturned by civil rights leaders, both religious and non-religious leaders who organized in the church.

Jim Crow-ism and all forms of segregation were abolished by way of the efforts of the Black churches. Young people have always been anchored in the church. Pastor K. Andre Brooks points out the establishment of fraternities, sororities, Chicago Urban League, NAACP, SNCC (student nonviolent coordinating committee), and the Black Panther Party were organized by the efforts and support of the Black churches. “These churches created a since of black organizational excellence and civic engagement in the community…. led primarily by young people i.e., millennial,” said Pastor K. Brooks.

“Don’t Break The Line; Don’t Scream and Holler. We have water, we have medics and minsters on the line. We’re going to bend down and pray. If a rock is thrown at you try to catch it. Wear big hats,” recalls Jacqueline Baldwin, Englewood Native, and former activist. These were the words she members Jesse Jackson saying to her and young activists in Chicago who were bused to from Englewood to Marquette Park as well as other racially segregated areas in Chicago to protest during the 1960s. Attending church was a way of life; you had no choice but to go to church. If the parents did not go to church, the children still were sent to Sunday school. As a teenager, Baldwin, remembers watching the horrific images of dogs being sic on young children, men, and women. She recalls watching bricks being thrown at Blacks, Blacks being spit on, and water hoses being used on them. These images were imprinted in her head and many others who wanted to fight back.

Where did they turn? Who could they trust? Who was responsible for the gathering of these passionate folks like Baldwin, who was compelled to do something? She states, “We didn’t organize in vacant lots. It wasn’t the schools because they were run by the racists who did not want to end segregation.” The church basements, and the pastor’s office is where we organized. These were the safest places for Blacks to go, to strategize, to plan the next rallies, to create fliers, create slogans, and meet other churches as well as pastors who were doing the same thing.

Segregation forced blacks to unite, celebrate it with each other, and fight together, and this came from Black churches, both Pastor K. Brooks and Baldwin’s stress.

“How many marches would have taken places if it wasn’t for the churches? Where were we going to a vacant lot? We stood up for those people who got hurt, got hit, and we prayed. Dr. King came to Englewood to organize and rally with the youth, led by a young Pastor John Porter. The child was used at the church to organize these movements; the churches birthed some of the greatest singers, actors, and teachers. In the church, you learned about everything and the way of life, Baldwin says.

Engaging Millennials Beyond The Ministry

“I was present in the environments that they were in, I was cool, and I was hip. I talked like them and spoke their language. I engaged them were they are…. They wanted to know more about me, and I told them my pains, insecurities, frustration with parents, God, and the Black Church…. bottom line I went out of the church and built relationships based on sincere interest and Love…not dogma, doctrine, religion, I Loved them,” said Pastor K. Brooks, when asked how he was able to get millennial to start attending a historical and traditional Black Church.

Pastor K. Brooks saw the importance of adapting to the culture of millennials by merely meeting them on their level, language, and lingo. He took it a step further by forming meaningful relationships with them outside of the church. While speaking on fostering relationships with millennials, Brooks says he engaged them at coffee shops, clubs, and community events. He found out what their interests were and found ways to teach them through ministry. His sermons reflected their language and integrated pop culture with the word of God in the message. He created a positive attitude and perception about the church, fostered a culture where being a believer is cool and hip, fashionable, cutting edge, and trendsetting.

Also, he enacted a revolution zeal for millennials to confront injustice. Greater Saint John AME Church will celebrate its 130th Anniversary in August and will continue to preach the “Good In Englewood.” There have been many initiatives that were led by millennials out of GSJAME such as the Gun Buy Back by Programs, GED Classes, Suit & Clothes Give-Away, After School Tutorials, Social Justices Rallies, Dinner Parties, Water Crisis in Flint Michigan and “Tea With A Queen” (a young girl mentoring series). It’s vital that millennials have an active role in the church where they can serve in leadership roles alongside the elders of the church, exclaims Pastor K. Brooks.

“I just recently started going back to church, and it has been eye-opening for me. Instead, of being pushed into focusing in on the religion aspect of church. It’s more of a spiritual connection that my pastor expresses towards the members of the church. He does speak from the bible and gives us lessons from it. He wants us to awaken our spiritual awareness.” Jahmel T. Singleton, Greater Saint John AME Church, Member

In Canaan Community Church, there is an environment in which millennials could challenge the bible and the pastors in a respectful manner, says Pastor J. This is a way of engaging millennials meaningfully and less critically. He adds, “I didn’t come to abolish ways, I came to embrace it. I don’t judge. I speak their frequency. I speak to their interests.”

One Narrative. One Community. One Englewood

“Live Where you work, Worship were you live and Eat where you live,” has been the motto of this millennial who chose to join the Black Church because I observed that my Pastor Kevin Andre Brooks, not trying to shove Christianity down my throat but offered a meal where we ate and learned the life-giving message of salvation through Christ together.

In unison, both Pastors iterate that millennials who are not feeling the inclusion at church or that their church is not active in social justice issues should first seek to talk with their pastor. Seeks out solutions before leaving; such solutions include becoming officers of the church, forming youth ministries, and also starting their ministry.

“We want to be a church that serves with the community. I made it a point to engage in the community where the church is housed. We don’t know how to join the movements without trying to take it over,” said Pastor J. Our churches are resources. A variety of initiatives take place at Canaan Community Church, including the Continuum around education, Edward T. Dunn Scholarships for college, Hip-Hop (Sunday Sessions), and end of the month Poetry Nights. Pastor J is also active at Henderson Elementary and participates in Angels of Hope, where he and church members visit the families of those who are incarcerated.

To the churches and pastors who do not engage millennials, address social justice issues, and who discount millennials, Pastor J says, “stop and listen to the young folks.

Black churches still matter because God is always concerned with the plight of black people in America. Any church, not a concern with is not echoing the heart of GOD.